Get Up and Grow 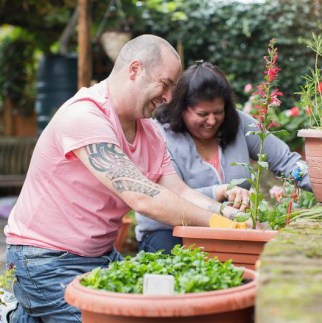 Get Up and Grow

Mind is a mental health charity that operates in England and Wales, with a network of over 140 local Minds providing mental health services. A significant proportion of their funding comes from delivering contracts on behalf of the National Health Service and local authorities, which have been under growing financial pressure in the last few years. In 2013, Mind started looking into design-led approaches as a way to provide new answers to these changes.

The result is Service Design in Mind, an ambitious programme that Mind has developed in collaboration with local Mind groups and the Innovation Unit (a social enterprise that supports charities and public services to find innovative ways to meet social challenges). Service Design in Mind was piloted with five local Minds, including Suffolk Mind, who were struggling to make the most of an allotment project that had been established by a small group of volunteers and wanted to use service design to find a way forward.

We had two or three volunteers who were really keen on ecotherapy, where outdoor activity is used as a treatment for mental health problems. They got together, found an allotment, designed a poster and then hit a bit of a wall. We were also looking for grant-funding for the project but without a clear plan it was difficult to bid for funds.

Service Design in Mind began in January 2014 with an assessment of how Mind nationally and locally approached the design of new services. The charity wanted to build on its existing design capabilities and understanding to develop a methodology that was relevant to the organisation.

Mind developed its own five-stage service design methodology (Set Up, Explore, Generate, Make and Grow) and a structured programme to support the five local Minds through the process. This included five day-long workshops, one for each stage of the methodology, where local Minds would learn the theory of service design before applying it to the problem they were trying to solve. In addition to the workshops, Mind staff offered ongoing support through coaching calls, project sites visits, an online community and a peer-to-peer support scheme.

The charity also developed its own set of design resources, including a handbook, a toolkit, a deck of method cards and an ethnography handbook.

Through its involvement in the programme, Suffolk Mind realised they needed to go back to the beginning and really expand their knowledge of what services users wanted and needed from the project. They conducted in-depth interviews with six people to understand what day-to-day life looks like for someone living with mental ill-health and how ecotherapy might be of benefit.

The team drew a storyboard to help communicate their new ideas. The fun, visual format helped them to engage more people in their plans and get more feedback to shape the offer. They then successfully piloted the service on one allotment before rolling it out to other areas.

By using a service design tools and undertaking a thorough process, Suffolk Mind were able to shape a service that was desirable to the people they were trying to reach.

The ecotherapy project, now known as Get up and Grow has expanded to five fully-funded allotments. One, for example, is a men’s only peer group, part-funded by Norfolk and Suffolk NHS Foundation Trust, which already ran a men’s only group but wanted to try a new approach. Suffolk Mind has found that the service design approach has gone down really well with funders, especially the ethnographic research they carried out. They find that funders like the fact that there is a strong evidence base for the service.

The charity has seen a complete transformation in many of the clients using the allotments and has found that people form friendships and support each other outside of the allotment as well. Though it was time consuming, a year on they are still using the insights gleaned from the in-depth interviews, and have been so inspired by the success of the project that they are using service design to develop other programmes and services.

We are constantly reviewing the service we provide. It’s an ongoing, flowing thing, constantly changing and reviewing. At least once a month we have an in-depth discussion with the clients at each allotment and ask them what could be better. We are constantly shaping it so it meets their needs, we are now looking at providing support in an evening as that’s what many people have asked for. That approach is very much based on what we learned from Service Design in Mind.