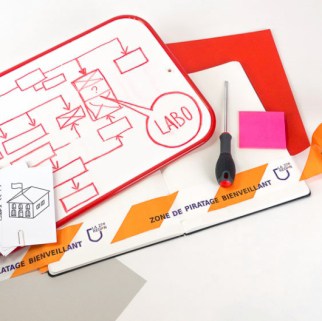 La Transfo is a programme created and run by La 27e Région – a non-profit that specialises in user-led public sector innovation. Through La Transfo, it aimed to help these regional administrations develop new ways of making policy and create in-house design innovation labs.

The organisers knew the programme would have to tackle two difficult questions:

Crucially, La 27e Région wanted to give the participants in the programme an experience of tackling real life projects using ethnographic and social design methods.

The programme took place over a two year period and involved a group of 15 key civil servants, closely supported by a team of designers. These designers were on hand throughout the programme, making sure projects remained user-led.

Week one focused on testing – the design team challenged the civil servants to start work on a test case. This involved a mix of group sessions and meetings with key partners and stakeholders. The civil servants were given the freedom to spend their whole week on this exercise if they wished, and worked together to keep each other up to speed if they had to miss a session.

During the weeks that followed, the civil servants and designers moved on to tackle the real issues affecting the region. They started with easier tasks, developing skills and understanding as they went, before taking on the more challenging projects in their remit.

The team addressed subjects including:

By week eight, the civil servants were able to prototype and test ideas themselves. One notable example was new policy called the Hub PME (SME Hub). With the support of the designers they outlined a new service that would greatly simplify the experience for companies applying for support from the Regional Council.

As a direct result of the initiative, the number of advocates and practitioners of user-led design and innovation within the participating organisations has grown dramatically. The initial group of 15 participating civil servants has expanded to a network of 70. The informal grouping of civil servants who went through the programme has since joined together to become an innovation team, strongly supported by senior management.

Support is also growing amongst elected representatives and administrators, with a presentation of the programme outcomes given to 200 high-level figures within the Regional Council. For the participating regions, La Transfo helped create new solutions to old problems. Around 50% of these new solutions have since been implemented and are now live in the regions – with two specialist service designers hired to support future work.

As well as tackling the live cases, the team developed a radically new approach to the Regional Council’s policymaking process. The new method is called the Policy Crash Test and uses a seven step process of ‘user loops’ to make the the political process more responsive and user-led.

For example, one of these seven steps is called the ‘friendly starter’ and consists of a one and half hour meeting between an elected official in charge of a new policy, and a group of four civil servants. Each participant has the right to ask any question they want about the new policy. This provides a valuable opportunity to challenge the assumptions behind a policy and so improve it.

Part of the lasting impact of the programme is that every six months, a meeting is held between Pays de la Loire and the three other regions who went through La Transfo (Bourgogne, Provence-Alpes-Côte d'Azur, Champagne-Ardenne). This allows them to share and learn from each others successes and difficulties – La 27e Région continues to work to support this network and to expand it further.