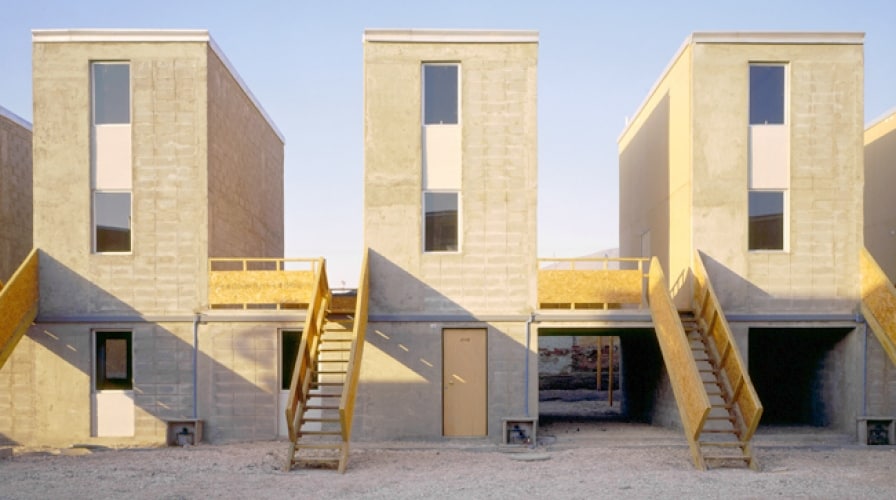 If we accept the premise that Denmark should help refugees in their regions of origin, this suggests a huge potential for Danish companies. If there was ever a time when our nation could contribute by creating sustainable solutions to complex and wicked societal challenges, this is it.

In 2001, the Chilean design firm Elemental was presented with a challenge: Would it be possible to build new homes from scratch for almost 100 homeless families at a cost of less than 7,500 dollars apiece?

Even in Chile, that is an outrageously low price, and the company executives realized that they would need a new approach. Elemental’s Harvard-trained designers and architects chose to include the homeless families actively through workshops to understand their needs and resources, and they found that in fact, they only needed to build half a house: If professionals created the first half of the construction, including the basic infrastructure such as plumbing and electrical installations, the families could handle the rest on their own. Often, they either had the skills themselves, or they had relations to someone with the necessary masonry and carpentry skills to finish the house. With an additional investment of max. 1,000 dollars, the family could have a fully finished home.

The principle of co-production is to design and organize efforts that enable the optimal use of resources to solve a problem. In many cases, the result is new value.

In the Chilean example, five years later, the now completed houses were valued at an average market price of 20,000 dollars. In addition, Elemental developed an approach and a business concept that the company was able to sell in other contexts – including the situation that arose a few years later, when Chile was struck by one of the most powerful earthquakes in recorded history, and a huge number of people were suddenly without shelter.

In 2010, the task was not to help a handful of homeless people but to redesign and rebuild large swathes of the city of Concepción, which had been reduced to rubble by the earthquake and the subsequent tsunami.

In Denmark, there have been heated discussions throughout the summer about how Denmark can best address the fact that the world is facing the biggest refugee crisis since the Second World War.

Indeed, a focused effort in the refugees’ regions of origin seems to be the Danish government’s ambition. This may involve sending money to NGOs and other aid organisations that carry out essential work in the local areas. Or it may involve supporting the local authorities and governments in various ways.

What if Denmark decided to carry out a strategy focused on the co-production of new and sustainable, local solutions in collaboration with the refugees?

But what if Denmark decided to carry out a strategy focused on the co-production of new and sustainable, local solutions in collaboration with the refugees?

That could be meaningful for three reasons.

Let me elaborate how this business potential might look.

From refugee camp to urban community

Where could Danish companies contribute with products and services that might help transform a unsanitary, dangerous and desperate environment into an urban community?

First of all, we have a large number of companies that specialise in construction and engineering tasks in relation to basic infrastructure, water cleansing etc. Big, globally oriented engineering firms such as Rambøll and Cowi are ready, also with regard to broader visions for future urban development. We also have well-known pump and thermostat manufacturers that could undoubtedly unfold their creativity in a more challenging environment than the ones their solutions typically target.

Next, Denmark has a wide range of experiences – good as well as less good – with what it takes to build well-functioning, attractive and dynamic urban environments. Danish companies such as Gehl Architects and SLA have long since made a name for themselves as creators of well-functioning urban spaces and cityscapes. How motivating would it not be for them to be asked to create attractive solutions in a situation where virtually everything is open and in play?

In the areas of homes and construction, Denmark has companies across the full spectrum, from modular prefab homes to socially innovative start-ups like CPH Shelter, which creates attractive rooms out of shipping containers and recycled materials, to cool VIPP, which demonstrates hip luxury with their own ‘plug and play’ version of a shelter.

Surely, these skilled architects and designers could draw inspiration from Chilean Elemental to bring their problem-solving capacities into play in cooperation with the refugees to create new Danish parallels to the ‘half-built’ Chilean houses.

Finally, we have a growing innovative design industry, which is increasingly reshaping the Danish democratic design tradition and bringing it into this new millennium.

Service design firms and innovation agencies such as Hatch & Bloom, 1508, Designit, ReD Associates and Futu as well as more behaviourally and anthropologically oriented consultancies such as Is It a Bird, Antropologerne, Anthropological Analysis and Kl.7 all specialise in involving the users and translating insights into real-life on solutions that influence human experiences and behaviour.

Ultimately, the creation of sustainable urban communities for refugees in their regions of origin requires that they are able to develop and structure their own democratic processes and decision-making forums. Here, Danish universities have a proud tradition of helping to draw up new constitutions and governance mechanisms, including the role they played in the 1990s, when Nepal developed into a more stable democracy and the Baltic countries gained independence.

Properly applied, the funds that Denmark allocates to assist in the refugees’ regions of origin could contribute to innovation and business development across the industries and markets I mention here – and, undoubtedly, others.

Properly applied, the funds that Denmark allocates to assist in the refugees’ regions of origin could contribute to innovation and business development across the industries and markets I mention here – and, undoubtedly, others.

Of course there is no guarantee that Denmark will be allowed to go as far as this outline suggests. Would the countries – and regions – in question be prepared to accept the creation of more long-term solutions that involve more than tent canvas, food rations and camp hospitals? Could the Danish resources be earmarked to go to Danish entrepreneurs and companies? And could we manage to create this transformation with the refugees themselves in the role as co-producers that is potentially within their reach?

Denmark has a long and proud tradition for not only creating good design but also making a humanitarian difference that goes far beyond the size of our nation. Let us hope that the Europe’s tragic refugee crisis may lead to a continuation of this commitment.