Lab Builders: Some thinking about the next generation of lab programmes 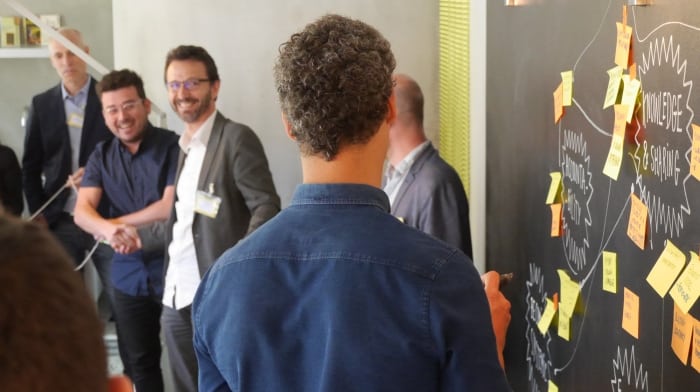 As in many other fields, “labs” have become seen as a silver bullet for change in public administrations and governments. According to Nesta, around 100 local, regional or national governments in the world have created, or intend to create, their own lab. From South to North and from the smallest organisations to big international institutions like UNDP or the European Commission. But how many will survive, provoke real change and remain disruptive in the long term?

The goal of this paper is not to feed the controversy around labs, but rather is a first attempt to explore a small selection of existing programmes and methods that aim to create innovation teams or labs within governments, or even more modestly to provide existing teams with innovation skills. These programmes have been set up by public agencies, foundations or non-profit associations like Nesta in UK, Bloomberg Philanthropies in US, networks of local governments like SALAR in Sweden or smaller organisations like us at La 27e Région in France.

1. Public innovation labs: why and how?

Some public managers ask “what is a public innovation lab?”. But there are two questions that may be more appropriate: the first is “why”, i.e. what are the deep motivations of creating labs within public organisations? The second is “how”, because the road is often more important than the destination.

As shown by Sarah Schulman in the Lab2 project two years ago, there is a long and vibrant tradition of experimental methodologies in the history of sciences and technology, which has spread to many fields including industry and services. It is no major surprise that the public sector shows a growing interest in these approaches, as many governments are looking for new ways to create a greater impact. In this context, labs represent a new narrative that reflects the “trial-and-error” and pragmatist mindsets that a growing number of people have been waiting for, at least since John Dewey described “the State as a permanent experiment” in 1927 in his book The Public and its Problems.

But there are also specific reasons that could explain the rise of labs. One might be the failure of several institutions in building concrete answers to these challenges, beyond governments themselves: e.g. academic research institutions, who appear unable to transform knowledge into real change, trade unions, whose representation is shrinking in most countries, and consultancy businesses, particularly the international corporations that tend to perpetuate prefabricated ideas. Labs are like DIY projects that have learned from these old models, and combined this knowledge with the leading trends from others such as the maker and hacker communities, design practices and the social innovation field.

Another reason is connected to the growing gap between management theories and real practices, which is generating distrust and despair within many administrations. The role of labs is not to add innovative tools to existing organisations, but to radically transform the practice of policymaking and to create more meaning and impact for the whole ecosystem. In a period of massive disconnection, labs could contribute to re-synchronising governments with society.

Last but not least, after decades of management and knowledge Fordism, perhaps labs are an attempt to re-internalise collective intelligence capacities within governments in a more reflexive and sustainable perspective – a bit like when cities decided to bring water supply contracts back into public ownership as they believed outsourcing was no longer sustainable.

These points have covered the general motivations. Now let’s explore the specific ideologies related to innovation, modernisation and reform of the public sector. All the following remind us that innovation is never neutral and can lead to different visions, for instance:

2. Labs are the processes that made them

Now the “how” question. You can't just bring in lab-like public managers with experience creating “innovation” departments through a top-down approach. That’s why new practices have been progressively developed and an ecosystem has emerged.

Led by champions like the MindLab born in 2000, a community of practice has grown up which has learned from successes and failures. A small but international, geopolitical and business ecosystem now exists and generates value, know-how, events (LabWorks, Labs2, Immersion in Public Design, Future State…), research (e.g in France, UK, Estonia), procurement, public policies, calls (e.g €6M in the new National Investment Programme in France), diplomatic cooperation (e.g between Denmark and Brazil), etc. The key actors are national and local governments (or networks of governments), public agencies, foundations, do- and action-tanks, non-profit associations, academics, etc.

One of the most interesting activities of this community is the creation of new methodologies and programmes that have been set up, either for one-shot projects (e.g. FutureGov), or for systematic and cross-government programmes (e.g La Transfo, Radical Change or Lab’AATF). All these programmes are different in their visions, strategies and methodologies:

Many projects aim at promoting new practices within the administration (Lab AATF, Radical Change), a few ones have the ambition to institutionalise teams and/or create spaces (iTeams, La Transfo, Bloomberg, FutureGov…)

Length and trajectories. Some programmes are short (a few days or weeks) and focus on the very first steps, like Nesta’s “Labs retreat”, some others are medium and long term, between 1 to 3 years and cover all the steps (La Transfo two years, iTeams three years). All suggest that following a critical path helps to reduce the risk of failure, even if it never guarantees 100% success.

It’s important but not always easy to investigate what the mindsets are behind all the existing programmes. We can mention for instance empowerment (e.g La Transfo), evidence-based policy (e.g iTeams), serendipity, abductive reasoning – also called “Detectives’ methods” by Umberto Eco (e.g La Transfo), learning process (most of the programmes). But most programmes consider trial-and-error and pragmatism as a must.

All kind of professionals and practitioners are working in the programmes, in many kinds of disciplines: core profiles may include traditional change management or project management, but more and more are connected with sociology, ethnography, human-centric design (interaction design, service design, management design). They can also include data-scientists, participatory urbanists and architects, artists, activists, journalists, ethno-videasts, etc. Most programmes use “double-diamond” style processes. There are some debates and controversies, e.g. between service design and design thinking, with the latter sometimes written-off as “post-it design”, disconnected from real change. More generally, cross-disciplinarity is systematically encouraged.

Business models and governance. There is a huge gap between very small programmes (a few thousands euros) and 24 or 36-month programmes (from €200,000 like La Transfo to $3M like iTeams), also between one-shot (FutureGov) and cross-administration programmes (iTeams, la Transfo, Radical Change, Lab AATF…). But whatever the cost, the origin of the funding is critical and determines who owns the power of decisions. Some programmes are funded as research-action projects by public resources (La Transfo), others are grant-funded and/or run by private foundations (Bloomberg Philanthropies) or public institutions (calls from the European Commission), others are traditional consultancies but might include property rights and royalties (e.g FutureGov). Except when it’s from digital investments, few public or private investors are funding labs.

3. Conclusion: Food for thought for the next generation of lab methods and programmes

What does this quick analysis tells us in terms of future developments? Here are a few possible directions.

A certain number of books (e.g Design for Policy, 2014), reports (e.g. Conseil et recherche, 2016), papers (e.g those shared on LabNotes by Nesta) suggest some strategies, principles, tactics and tips for creating successful labs. Are we happy with this? What are we missing (for instance on subjects from resilience to political turnover)? What are the new nodes, the key points we must investigate now? Would it be possible to go further, and share some robust patterns and at the same time keep the singularity of each project?

How are labs held accountable? Do they require new patterns when it comes to measurement of success? Should we measure the capacity to deliver solutions, or to frame problems? Or both? How do we do that technically?

Labs require long-term investment. Where will it come from in a period of shrinking public budgets? Should we explore where there is still public money, for instance digital policies? Or could we build a kind of “public impact bond”, or is that too controversial? Do we need things like 1% of funding dedicated to action-research in big public projects?

For the moment, Labs are far from succeeding in contributing to systemic effects. How could we create this catalytic capacity earlier in the process? How could we develop this, both within (deeper embedded in policymaking, but also connecting issues such as management/impact/democracy/well-being together) and outside administration (with other administrations, schools, communities, entrepreneurs, etc)? What about disruption in related fields like political parties, trade unions, traditional consultancy, academic research, etc?

Here are a (small) selection of the methods and programmes discussed during Labs builders, an event organised by La 27e Région and Nesta as part of Design for Europe on June 16 and 17 in Marseille.

Methods and programmes for skills, transferring knowledge within governments