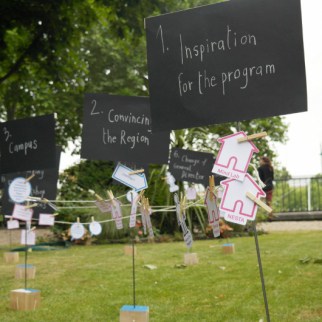 Earlier this summer La 27e Région and MindLab co-hosted an international workshop in Paris as part of Design for Europe, bringing together 40 pioneers of public innovation from the USA, Canada, Mexico, Chile, Denmark, Great Britain, Belgium and of course France. The goal of the two-day workshop, titled ‘Immersion in Public Design’, was to explore new ways to innovate in a more systemic way in the public sector, based on real cases provided by participants.

The first day was held outdoors in the gardens of the Ministry of Decentralisation and Civil Service, and the second at Superpublic, a co-working space specialising in public innovation in the 11th arrondissement of Paris. On the final afternoon, some participants also attended another session at the invitation of the OECD to lay the foundations for a future international programme and knowledge exchange between public innovation labs worldwide.

What was learned from these two intense days? More than generic or definitive teachings, but here are some trends heard here and there.

Building on the diversity of contexts

As demonstrated by the participation in the workshop, the lab initiatives come from all over the world and are of great diversity – their size differs greatly (from France’s Pays de la Loire lab at a local level to the US Office of Personnel Management lab at a national one), their aims and angles of attack vary (from low tech social innovation to open data), levels of experience also fluctuate (some have only few months of experience whereas others, such as MindLab, have almost 15 years).

In particular the political, economic, social and cultural environments are very different, even difficult to compare. How can we compare two countries, when the number of inhabitants of one is equivalent to that of a city in the other? Can we compare the needs of transforming a small local authority with a huge national bureaucracy? Certainly not. But still, it was striking to see these initiatives betting on the same trends of human-centered innovation and the increasing the co-design of public policies.

Rethinking the concept of reform

Nobody seems to be satisfied by the simple adage ‘do better with less’ to characterise any new reform. Firstly, what is ‘better’? And what is ‘less’? In a world of increasing complexity, the most simplistic formulas are often the worst. These prevent us from truly working on solutions that are more multifaceted and balanced, and include not just fiscal performance criteria but also criteria with more significance – such as the improvement of the experience for the users, the added-value to democracy, transparency, the autonomy of individuals, or the the social and ecological gain.

Debates still exist around the potential and limits of design or ethnology in these efforts. But we must now go beyond these discussions. Everyone agrees that we should not mythologise these methods or just add simple additional tools to the innovation toolkit. The challenge is more around learning from these practices to achieve more structural changes in the very core of the policy process. For example, by:
allowing a the culture of ingenuity to grow amongst officers and elected officials

In this context labs, as new multidisciplinary teams embedded in the core of public institutions, appear as spaces where such practices are protected and promoted. They are part of these new ‘strange devices’ which aim at transitioning to a new normality (as referred to by Charles Leadbeater) and preparing the public sector for a world of resilience. The key questions then should focus less on the principle than on the conditions of their establishment and development: how to create a governance and funding model that gives labs both enough institutional legitimacy to play an active role, but also sufficient autonomy for being hands-free? In short, how to institutionalise without losing their ‘pirate’ side? How to create alliances internally and externally to prevent them from being isolated in the institution? Where does the work of the lab starts, and where does it end? How can we better converge the different fields of innovation in labs? (Digital, social innovation, civic participation, etc.).

Feedback from current lab experience does exist, and most of them advocate a gradual rise, step-by-step, through doing proofs of concept. But going forward the community has also expressed the need to better share practices and strategies, as well tactics and ‘tricks’ for getting there.